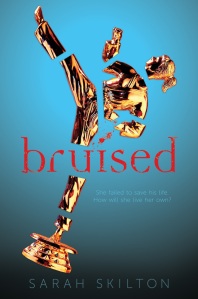 Today we’re talking to Sarah Skilton, whose debut novel, BRUISED, hit stores yesterday. I adored this book, especially its gutsy, conflicted, and very-much-in-need-of-a-hug narrator, Imogen. She’s a wonderful character, but the premise is pretty undeniable, too:

When Imogen, a sixteen-year-old black belt in Tae Kwon Do, freezes during a holdup at a local diner, the gunman is shot and killed by the police, and she blames herself for his death. Before the shooting, she believed that her black belt made her stronger than everyone else — more responsible, more capable. But now her sense of self has been challenged and she must rebuild her life, a process that includes redefining her relationship with her family and navigating first love with the boy who was at the diner with her during the shootout. 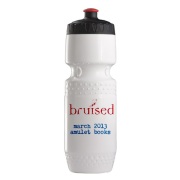 Many thanks to Sarah for taking the time to chat with us, but on top of that, SHE COMES BEARING PRIZES! Leave a comment on this post and you’ll be entered to win a copy of the book and a BRUISED water bottle. And now, let’s talk Tae Kwon Do, gender roles, and Bunnicula with Sarah!

Imogen is such an unforgettable character – she’s girly and brash and innocent and incredibly tough all at the same time. How did you come up with her?

Thank you! I’ve always felt that most characters possess inherent contradictions, because I do, and all the people I know do. For a silly example, if I’m at the airport, I’ll probably pick up US World News & Report alongside Star Magazine because I genuinely like both. With Imogen, it was easy for me to picture a teenage girl who was immensely skilled and driven in one area (martial arts) but inexperienced in another (romance, interpersonal relationships). She also happens to be the youngest person in her grade, so it made sense to me that she was not quite as mature as her classmates and friends.

The first two things we learn about Imogen are that someone was shot to death right in front of her, and that she blames herself and believes she should have stopped it. What was it like writing from the perspective of a character who is dealing with trauma and guilt like that?

In some ways it was cathartic, because I know how it feels to be depressed and guilt-ridden (though not for the same reasons as Imogen). Other times, writing from that POV weighed me down a little and I had to be sure I added humor or slightly happier scenes so as not to bury the reader in only one type of emotion. The character of Hunter, Imogen’s older brother, helped bring out some levity, as did Ricky.

Imogen is a girl who likes to throw a punch, and sometimes, the people in her life don’t quite know what to make of that. Can you talk a little bit about how Imogen’s journey in BRUISED is shaped by gender?

I definitely think that “getting into fights” is viewed differently when discussing a girl versus a boy. With boys, they’ve been wrestling since toddlerhood (rightfully so, I would say) and a fight later in life might be considered a normal, healthy rite of passage, especially if it’s tied in with learning to stand up for yourself.

When we think of girls fighting, it’s usually in a humorous or unhinged connotation; silly-looking people slapping each other ineffectually, or pulling each other’s hair, or being “hysterical.” It’s not considered positive; it’s considered unladylike. But it’s just as important, or even more important for girls to learn how to defend themselves properly and confidently, to react right away if someone makes them uncomfortable or moves past their comfort zone in a way that’s threatening.

Like Imogen, you’ve studied Tae Kwon Do. What’s a part of your training experience that you brought to the book?

When I was taking classes I noticed it was difficult for the female students (myself included) to act “aggressively.” To continues my train of thought from the previous question: it’s ingrained from birth that girls should be nice and polite, even in situations that are unpleasant or unwanted. When Imogen is teaching her young student Taylor a technique in which you’re supposed to pull your opponent toward you, it goes against all of Taylor’s instincts, and I think that’s how many girls feel when learning self-defense.

I also went through a phase in my 20s of really, really wanting to be in a fight. It sounds strange or self-destructive, but there was a part of me that wanted to know what it would feel like, beyond regulated sparring in class, so I could get over it. Imogen has different reasons for feeling that way, but the frustration she struggles with was somewhat drawn from my own life and training.

Who are some of your writer (or non-writer) role models?

I admire Gillian Flynn (author of Sharp Objects, Dark Places, and of course her recent hit, Gone Girl) for her fearlessness. I find her characters to be fascinating and horrifying and whip smart and grotesque and lovable in their insanity. She’s never afraid to “go there” in any sense, and I really hope to learn from that.

And finally, as this community is All for One and OneFour KidLit, we’d like to know two or three books that inspired you when you were a kid.

My pure, all-encompassing obsession was the James Howe Bunnicula series (particularly Howliday Inn, which featured Chester the Cat).  I wrote Mr. Howe letters when I was in elementary school in the mid-1980s, and he wrote back! That experience definitely inspired me to pursue writing.

I also loved From the Mixed-Up Files of Mrs. Basil E. Frankweiler by EL Konigsburg. The kids ran away and lived in a museum! How cool is that?!

The coolest! Thanks again to Sarah Skilton for talking to us. And don’t forget, leave a comment on this post by Friday, March 8 at 12 pm ET for a chance to win a copy of BRUISED and a water bottle.

Sarah Skilton is a black belt in Tae Kwon Do, a fact that came in handy while writing her martial arts-themed debut YA novel, BRUISED. She and her husband, a magician, live in Santa Clarita, CA with their son. She’s never been sawed in half, but there’s still time. She loves to read coming-of-age and YA novels, effed up memoirs, and edgy non-fiction.

This interview was conducted by OneFour member Mary McCoy whose YA novel DEAD TO ME will be published by Disney-Hyperion in Fall 2014. This interview is part of an ongoing series of interviews with The Lucky13s —- YA, MG, and children’s books authors debuting in 2013.

11 thoughts on “GETTIN’ LUCKY: An Interview with Sarah Skilton, Author of BRUISED”