We have a lot of fantastic authors at OneFour KidLit and are excited to introduce them all to you. One author, four questions. Today we’re talking to Tara Dairman, author of THE DELICIOUS DOUBLE LIFE OF GLADYS GATSBY. Here we go!

What’s your debut book about? Can you share any cool details with us?

Thanks for asking! Here’s my blurb for THE DELICIOUS DOUBLE LIFE OF GLADYS GATSBY:

Gladys Gatsby has dreamed of becoming a restaurant critic for New York’s biggest newspaper—she just didn’t expect to be assigned her first review at age 11. Now, if she wants to meet her deadline and hang on to her dream job, she’ll have to defy her fast-food-loving parents, cook her way into the heart of her sixth-grade archenemy, and battle Manhattan’s meanest maitre d’.

As for cool details, I can reveal that the book also features a crème-brulée-triggered fire, troublemaking rabbits named Edward and Dennis Hopper, and a plotless Broadway show that bills itself as “the first musical ever to be based on a teen magazine.” 🙂 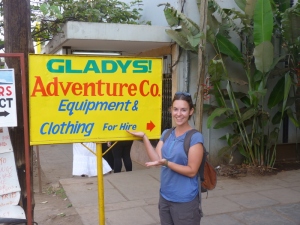 A sign I found randomly in the town in Tanzania where I finished drafting my book!

So, you’re getting published! How’d that happen?

I drafted Gladys Gatsby very slowly from 2005 to 2010, squeezing in writing time between work, producing plays in festivals, and an epic round-the-world honeymoon (more on that below). Then in late 2011, I entered a contest at Miss Snark’s First Victim, where agent Ammi-Joan Paquette spotted it and requested that I query her. A couple of months later, she was my agent, and a couple of months after that (and after a nail-biting round of requested revisions) we sold Gladys to Putnam!

So, in the end, it will be nine years from when I started writing this book to its publication. But it has absolutely been worth the wait.

What do you do in your daily life outside of writing?

I teach writing to kids and I do some freelance editing. There really is no escaping the written word for me!

What cool facts might readers not know about you? 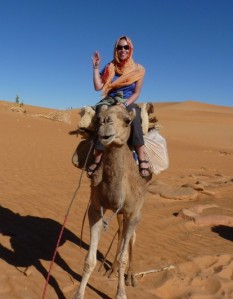 Good to eat. Not so comfy to ride.

1) As I hinted above, I’m a veteran of a very long honeymoon—74 countries long, to be exact! Three weeks after we got married in 2009, my husband and I took off for South America, and we didn’t stop traveling for two years. We ended up visiting all of the countries in South and Central America, about half the countries in Africa, and a good swath of Asia and Eastern Europe. If you’re interested in more details, you can find our travel blog at andyandtara.com.

2) Before I turned to middle-grade fiction, I wrote plays, most of which would be totally inappropriate for a young audience. (One critic called my play PB&J “equal parts Arsenic & Old Lace and Cabin Fever with a Lorena Bobbitt slant.”) I still wonder how I’ll reconcile these two sides of my writer personality in the future, but at least Shel Silverstein and Roald Dahl have blazed that trail before me.

3) Thanks to our travels, I’ve eaten and ridden some interesting animals. Here are a few lessons I’ve learned:

-Ostriches are crazy fun to ride.

-One-humped camel tastes way better than two-humped (but two-humped is way more comfortable to sit on).